When I mention to people that I am a CrossFit coach, I often get asked what CrossFit is.

This question is sometimes hard to answer in one sentence.

Essentially it is a fitness methodology incorporating aspects of different sports and training programs, including weightlifting, gymnastics, strength training, running, rowing, and more. The program’s structure promotes broad improvements to fitness and health, helping create well-rounded athletes. CrossFit is also universally scalable. While all athletes follow the same program; movements, loads, and effort may be scaled or modified, ensuring all athletes work at a similar relative intensity for that workout. The result is a fitness program that is effective and inclusive for everyone, no matter their age, ability, or fitness levels.

But there is more to it than that.

Below we’ll take a brief look at some of the thoughts and beliefs behind the formation of CrossFit and why we train the way we do.

In the early days of CrossFit, its founder Greg Glassman coined two phrases to describe what CrossFit was and what it aimed to achieve. Glassman described the CrossFit methodology as “constantly varied functional movements performed at high intensity.” CrossFit aimed to increase individuals’ health and fitness, which Glassman defined as “increased work capacity across broad time and modal domains.” These two phrases were considered revolutionary at the time, especially by adherents to the CrossFit methodology. They were seen as an integral part of what made CrossFit unique and considered important enough to be emblazoned across T-Shirts given to everyone completing a CrossFit level 1 course, the entry-level course for instructing or coaching CrossFit classes.

The two phrases are not used as much within CrossFit circles today. However, they are still relevant in describing what CrossFit is and the rationale behind the program’s structure. We can examine them further to see the ideas that lead to their formation.

Constantly Varied – One of the original aims of CrossFit was to prepare its trainees for the unknown and the unknowable. Through the constant variation of movements, loads, and time domains of workouts, the body can make adaptations without getting stuck in set movement patterns or creating strength or movement imbalances.

Functional Movement – Functional movement is a buzz term in the fitness industry these days. It is used by just about every popular fitness program today. But what is it? Functional movements are natural and essential movement patterns used in everyday life and not only at the gym. Sitting and standing up from a chair? A squat. Picking up something heavy off the ground? A deadlift. Lifting something above the head to put on a shelf? An overhead press. They also use multiple muscle groups and joints of the body. They require a certain level of coordination, focus, mobility and stability. These movements help your body function better as a whole unit rather than individual parts working independently of each other.

High Intensity – Performing these movements at high intensity leads to more remarkable results. Intensity is often subjective, but can also be measured as either work divided by time or through power output. The more work you do in a set time, or the higher the power output, the more intense the effort is. Greater intensity allows the achievement of superior results with less time.

If you can run a marathon but can not lift your body weight off the ground, are you truly fit?

Likewise, if you can Squat 200kg but can not run a kilometre, would you consider yourself fit?

These are interesting questions and would probably come with different answers from different people.

So what is true fitness?

Glassman pondered this question in the early days of CrossFit and sought to define what fitness was. He used three models to evaluate and guide his view on fitness, which he defined as an increased work capacity across broad time and modal domains. This definition of fitness helped establish CrossFit as a legitimate health and fitness methodology and aided their rapid growth in the fitness industry

So what does it actually mean? 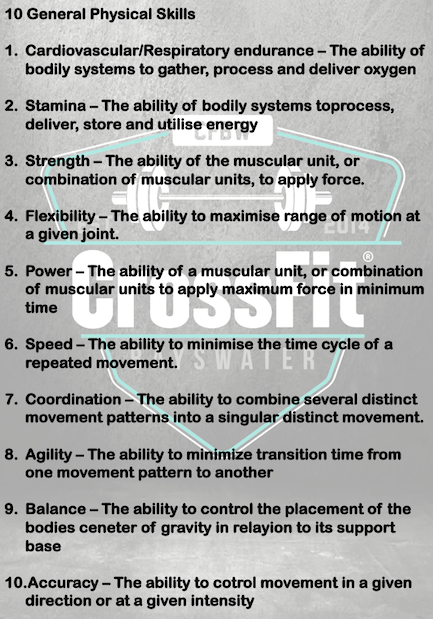 Firstly Glassman realised that his fitness regime needed to incorporate the 10 general physical skills widely recognised by exercise physiologists. These ten skills are cardiovascular/respiratory endurance, stamina, strength, flexibility, power, coordination, agility, balance, and accuracy. Glassman surmised that you are only as fit as you are competent in each of these skills and that a regimen develops fitness only to the extent that it improves each of these skills. Improvements in endurance, stamina, strength, and flexibility occur through training. Improvements in coordination, agility, balance, and accuracy occur through practice. Power and speed are adaptations of both training and practice.

Secondly, Glassman believed that fitness is the ability to perform well at any and every task imaginable. Real fitness requires an ability to perform well at all tasks, even those that are unfamiliar, in varying combinations. In practice, this requires the athlete to move away from any set inclinations to specific exercises, sets, reps, rest periods, and routines. Nature often presents new challenges that are unforeseeable and unfamiliar; to prepare for this, training stimulus should be kept broad and constantly varied.

The third model used to evaluate fitness is the different energy systems or metabolic pathways used in the body to provide energy for all human activity. Our bodies employ three primary energy systems known as the phosphagen/ATP-PC pathway, glycolytic/anaerobic pathway, and the oxidative/aerobic pathway. While there is some overlap between the three pathways, the primary energy system used is dependent on the intensity and duration of that activity. The phosphagen pathway is used 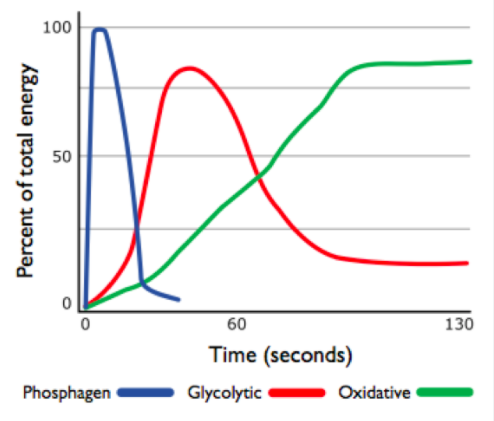 The type of fitness promoted by CrossFit requires training in each of these pathways. The variation of work and rest intervals the number of repetitions and the duration can control the dominant pathway used during any exercise or workout. Training all these pathways leads to improvements in both cardiovascular function and fat loss. It can also increase power, speed, strength, and muscle mass.

Putting it all together

Training with functional movements teaches our bodies to work as a system and function better as a whole. Putting these movements together in various ways allows us to continuously adapt to the ever-changing stimulus. Modifying other variables such as workout duration and rest periods alter the intensity and ensure a well-rounded fitness program that incorporates all the primary energy systems. This variation also keeps the training fun and allows for substantial progression.

Another thing Glassman recognised is that the results needed to be measurable and comparable over time. The CrossFit program is data-driven. CrossFit gyms often use whiteboards or computer programs to keep scores and records. Precise rules and standards for movement and performance exist, and a clock is used to obtain relevant data from every workout. This data tracks an individual’s progress, provides motivation and helps create a path to one’s goals.

CrossFit workouts are generally completed in group classes, providing a friendly and supportive atmosphere. The natural camaraderie and competition in this setting help produce an intensity level that is often hard to match in other exercise settings. The community feel of a CrossFit gym is one reason CrossFit is so effective and popular, giving rise to over 15,000 affiliates worldwide.

If you’re looking for something different and want to book in for a FREE 2 week trial head to http://bit.ly/3t5pPBq

Get started at Crossfit Bayswater today! Start your free trial